Brodeur: Beyond the Crease


A thoughtful yet light-hearted look at politics, society and pop culture from a white-collar, Canadian redneck who would much rather be spinning tunes between plays at sporting events. Four-time Cup finalist. Three-time champion. Two-time Vezina winner. Olympic gold medallist. The picture of poise, professionalism, stability and consistency. And now, author, recounting his youth in the Montreal suburb of St. Toronto Star columnist Damien Cox helps Marty put pen to paper as he discusses what it's like working for one of the biggest hard asses in pro sports in Lou Lamiorello, playing in the shadow of the New York Rangers, being served with divorce papers when he was down 3 games to 2 during the Eastern Conference semis, the Bertuzzi incident, the lockout, what led him to sign a self-negotiated six-year deal last spring, and being a Quebecer and a Canadian at the same time while playing a game which is perhaps the one thing that has kept our country united over the last fifty years.

The Quebec-born Brodeur whose father, Denis, was also a professional goalie writes primarily about his professional experiences.


But he seems to share equal pride in representing Canada in the Olympics in , and , although that pride is tempered by disappointing results in Turin, where the team failed to win a medal. With all that time on his hands during the lockout that canceled the entire season, Brodeur does a good job of capturing the frustration of an aging athlete i. The players had to make a lot of concessions that hit them in the wallet. 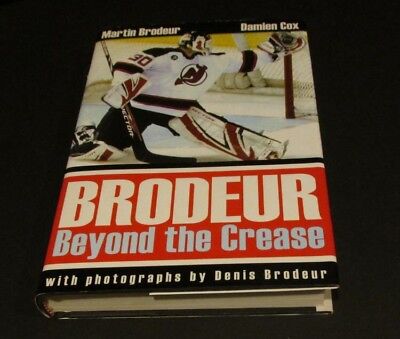 He also makes clear his displeasure with decisions made by the league to promote individual stars at the expense of the teams. But there's more to the man than the headlines on the ice.

The tabloids went wild when Brodeur's marriage fell apart and he began a relationship with his sister-in-law. I play with a new stick every game, so the first thing I do at the rink is get my sticks ready.


I'll use one for warmup, one to play and have three new ones on the bench. Some of the sticks I may use later for practice. I mark the ones I use in games on the knob with the date and the opponent, so if I give them away to friends, family or charity, that information is there on the stick.

I give away more than a hundred sticks every season. My teammates always want them, but I often laugh when I see them everywhere for sale. I haven't changed my stick pattern in a decade. Dressed in shorts, a T-shirt and flip-flops, I like to sit on the couch and hang out with my teammates, just shooting the breeze and talking about just about anything until the team meeting with the coaches 90 minutes before game time. That meeting is usually short and to the point, just going over some basic information about our opponent. When that's over, I'm the first one on the massage table.

We've had different people over the years, but my favorite was Tom Plasko, who joined the Devils for the '05—06 season. While he works, he talks to you positively, makes sure you feel loose.

I first used him with the World Cup when I was struggling with a stress hernia problem. After that tournament, I felt better than I had in years. He releases the muscles, cracks my back, and does a little work on my hamstring or shoulder, whatever might be bothering me. He knows exactly what needs to be done to my stomach and abdominal muscles, and the whole treatment takes about five minutes. After that, I go into the trainer's room, talk to the trainer, make sure my teammates have been able to organize the tickets they need for that game and little things like that.

After that, I stretch for 10 minutes, nothing too fancy or elaborate, just enough to add to what has already been accomplished with the massage. Now it's time to sit in my stall and focus on the game. I like to visualize the possibilities, and I look at the opposition's lineup to find the players I can see easily in my head. I don't keep a little black book on shooters.

It's all in my head. I know from experience which way everybody shoots, their tendencies and what they like to do. Still, there are so many new guys all the time in a team league, there are going to be unfamiliar players in many games.

I start to get dressed, and I do everything left to right, more by habit than superstition. In every NHL dressing room, there is a pre-game clock that starts counting down from 40 minutes, and when it's down to zero that's the end of the minute warmup.